Coconut oil; seems to be the cure for everything at the moment. But is it really? 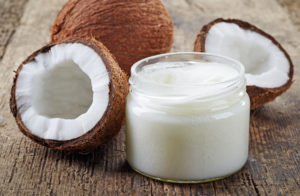 Last year I asked a prominent cardiovascular physician what scientific evidence there was for coconut oil being so beneficial for our heart and cardiovascular health in general. ‘None’ he said, ‘It’s all very clever marketing and the latest fad.’

Very interesting I thought. I’ve never been a big fan myself. I use it in moderation in raw desserts but I certainly don’t add it to coffee or cook with it all the time. Nor do I eat it off the spoon. No, No, No!

The current amount of coconut oil consumption scares me and I worry about the long term health implications so I want to share a few facts with you so that you can make up your own mind on how you consume it.

What is the nutrient value of coconut oil?

One tablespoon of coconut oil contains 117 calories and 13.6g fat (of which 11.8g is saturated). There is no vitamins or polyphenol antioxidant compounds like is found in extra virgin olive oil.

There are various different types of fat: Saturated fat and unsaturated fat, the latter being either polyunsaturated or monounsaturated. There are also trans-fats which are the unhealthiest of them all.

Saturated fat is divided into different types depending on the number of carbon atoms in the molecule. They can be short, medium or long chain. Coconut oil is made up of approximately 92% saturated fat. About 45-50% of the saturated fat in coconut oil is the 12 carbon variety, known as lauric acid. Whilst saturated fat raises bad (LDL) cholesterol, lauric acid can also raise good (HDL) cholesterol and overall cholesterol. Lauric acid is what anyone refers to when they say, ‘but coconut oil has good fat that is metabolised differently.’ This is because lauric acid is water soluble and is therefore absorbed directly into the blood stream and metabolised by the liver. Long chain fatty acids are absorbed into the lymphatic system. There are mixed reports amongst scientists whether lauric acid is a medium chain or long chain fatty acid. Either way it acts more like a long-chain fatty acid in our gastrointestinal tract.

What are the other types of saturated fats in coconut oil?

The World Health Organisation warns that eating a lot of coconut oil is risky behaviour because it can lead to an increase in coronary artery risk.

More and more doctors, like the one I spoke to mentioned above, are now voicing their concerns over the coconut oil fad. Dr Robert Eckel, director of the General Clinical Research Centre at Colorado Health Science University in Denver said, “Saturated fat intake does contribute to LDL (bad) cholesterol and that has been well documented by research.”

One of the best things you can do for your heart is to lower your LDL cholesterol and with coconut oil containing 92% saturated fat, are you really doing the right thing for your heart? Don’t get me wrong, cholesterol is important and necessary and it can cause problems in the body if it is too low. But as always, there is a balance and I don’t believe that we are going to find this by consuming the vast amount of coconut oil that we currently do. In fact, your body is more than capable of producing enough cholesterol for all its functions.

Don’t be fooled also that ‘Virgin Coconut Oil is different’. You end up paying more for something that is really not that much better. Virgin coconut oil is not hydrogenated (an industrial process where unsaturated fats take on the physical properties of saturated fats). However with 8% of coconut oil being unsaturated, only 8% can become hydrogenated usually to stearic acid, which has been shown to have minimal effect on LDL cholesterol levels. So in summary, hydrogenated or virgin coconut oil has the same effect on LDL cholesterol.

What worries me is the lack of information and research there is about coconut oil yet people are going crazy over it. “Most of the research so far has consisted of short-term studies to examine its effect on cholesterol levels. We don’t really know how coconut oil affects heart disease,” wrote Walter C. Willett, M.D., chair of the Department of Nutrition at the Harvard School for Public Health. “And I don’t think coconut oil is as healthful as vegetable oils like olive oil and soybean oil, which are mainly unsaturated fat and therefore both lower LDL and increase HDL.”

I remember having a stall at an event a few years ago and talking to a woman from the Philippines. We got talking about coconut oil and she laughed. She said, ‘Everyone eats it, why? In the Philippines we use it a lot on our hair and skin but we don’t eat it like people in Australia do. It is crazy’ !!

Polynesians for example do consume a lot of coconut fat but they also consume a lot of fresh fish to obtain their omega 3, generally don’t smoke or drink and eat a lot of fibre. They are also very physically active. Compared this to the Standard Western Diet where exercise rates are low, salt intake is high, fibre intake is low, processed food is high AND we then eat coconut oil in every single way possible. Polynesians do not eat saturated fat from any other sources on top of coconut oil.

What are the healthier alternatives?

The Dieticians Association of Australia follows the 2013 Australian Dietary Guidelines produced by the National Health and Medical Research Council. This states that Australians should avoid foods high in saturated fat, of which coconut oil definitely is. Personally I feel that we need to look at the whole diet and be sure to include plenty of fruit, vegetables, healthy fats (olive oil, nuts, seeds, and avocadoes), legumes and whole grains. There is not currently any long term studies on how coconut oil affects cardiovascular health long term and until then I would use with caution.

More information can be found in the New Zealand Heart Foundation’s evidence paper: ‘Coconut Oil and The Heart’